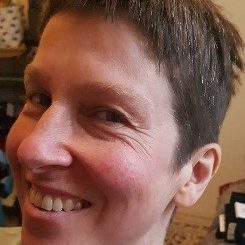 I graduated from Cambridge University in Philosophy and History of Art in 1994.
I trained as a physical performer and theatre-maker with Jacques Lecoq and Philippe Gaulier 1994-1998. I have worked as a performer, director, puppeteer and theatre-maker solo and with many companies in Europe, Japan and the UK. 2003-2007.
In 2008-2009 I did an MA Practice as Research at Kent University and in 2018 gained my AHRC-funded doctorate from Royal Holloway, University of London. My research interests are in somatic education, performance and self-image, puppetry and new materialism. I teach movement for acting at Rose Bruford College, and I am a visiting lecturer and teacher in many HE institutions. I am also artistic director of the multiple award-winning company, Beady Eye, and have been supported and commissioned by the Barbican (BITE), The Point, Farnham Maltings, South Street, Puppet Centre Trust, Theatre Royal Margate, Espace Périphérique and La Nef.
I am a mother and an improviser and give regular Feldenkrais lessons (Awareness Through Movement and Functional Integration) to a broad range of adults of varying abilities.